I could not be any prouder of my kiddo. Yesterday, he was upset about a bus incidence and said, “I’m done.” He went onto say,

“Most of the time, I try to let it go.  I will look out the window and think of other things. But, I’ve had enough. I can’t take anymore.  I’m done!” 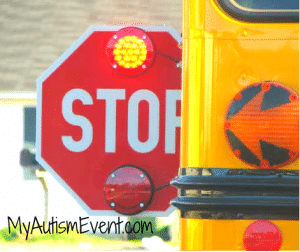 He’s 8 and in 3rd Grade. AND, he is on the AUTISM SPECTRUM. He could not only verbalized his frustration, but was ready to advocate for himself. When I suggested we make an appointment with the assistant principal, he said, “YOU CAN DO THAT?!?!”

So, we marched into the office with his head barley looking over the counter, he said, “I want to see Mr. Assistant Principal.”

Even though he could not see him right that minute, he rolled with it.

Throughout the day, I waited on pins and needles for an email or a call. It. did. not. come. When my kiddo came home, he said that he did get to talk to the AP and the guidance counselor. (YES!) AND, he told them how he felt. He felt much better when he got to take out all his anger on a pillow and the AP said he would investigate it. So far, so good!

Around 5ish, I got a phone call from an over-the-top excited AP.  He could not have been any more proud of my kiddo’s ability to express himself and the leaps and bounds progress he has made since last year. WOOHOO!!!!

So, needless to say, I am beyond tickled for my little guy.  He has learned that he can use his voice to be heard. Imagine all the doors this is going to open for him.